In Memory Eternal: Beslan 10 Years On

Every 1st September is a special holiday for us Russians, its the day children go to school and is celebrated with a "leneyka". This is a ceremony, mostly put on by the students themselves, with poetry reading, dance, singing, folk acts and so on, culminating in an 11th grader (our schools are 11 years long) carrying a 1st grader on his shoulders while the 1st grader rings the ceremonial first bell.

But ever since 2004, this day also brings with it another memory, the memory of Beslan. The small town in our province of North Ossessia, in which a school full of teachers, students and parents was taken hostage and then massacred. The loan police officer was quickly shot down as over 30 militants, half Arabs, half Chechens, all Sunni Jihadist Fanatics, charged in. They took over 1.000 hostages.

These were the men of the Riyadus-Salikhin Battalion, sent by the now dead and damned Shamil Basayev, former minister of the military in the short lived Chechen "republic". He was a darling of the West and the Saudi/Qatar Jihad machine.

They quickly separated the men, took them upstairs and started shooting them. Then the rapes and torture started of the children and women. Equally during those 3 days of Hell, were the hostages denied water and food. All this in heat of over 32C.

The gym was lined with explosives. When I saw on the coverage that several of the Jihadists were showing their faces, I told my wife, this is a suicide mission. She was in denial. Three days later an explosion rang out, one of the bombs in a basketball hoop had fallen down and detonated. A chaotic rush of spetnaz, regular military and every father with a rifle surged into the school to save as many lives as possible. The Islamic Sunni Jihadists started to massacre the civilians, mostly children. They gave no quarter. Three hundred thirty four hostages, half of them children, lost their lives (156). At least ten special forces also died, as well as 31 Jihadists.

Many men died that day, protecting the children with their bodies. One of this writer's best friend's spetnaz buddies sacrificed himself by covering children with his body. Even in the depth of this tragedy, the true Russian Christian warrior soul was on display. 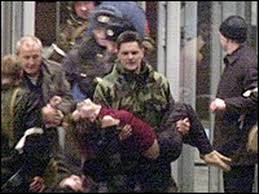 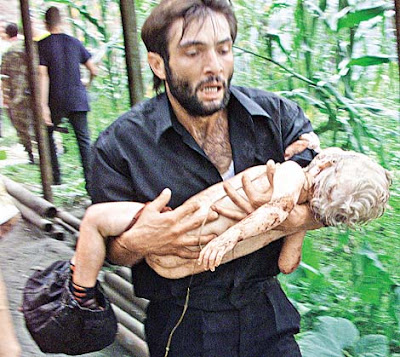 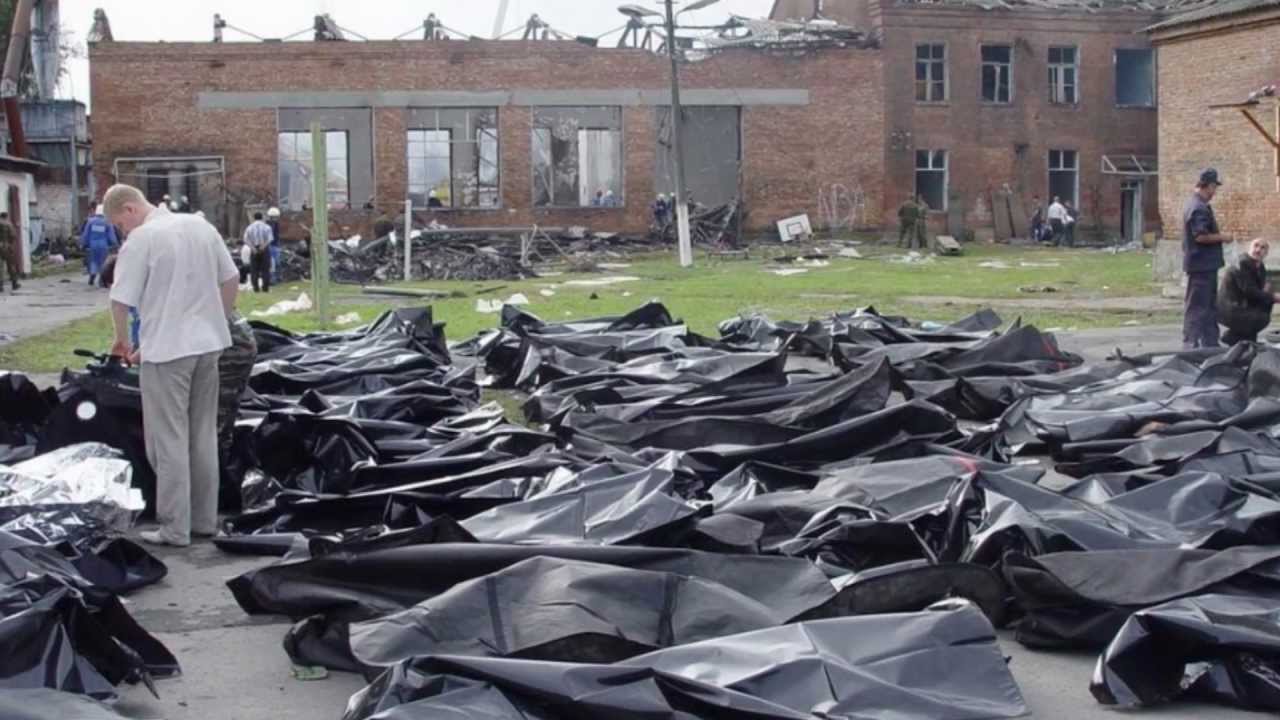 It should be noted that the Western media used every term possible, but never the term terrorist, when describing these animals. The BBC was particular in 1. Calling them Separatists and 2. Never mentioning that the majority of these animals were Arabs not Chechens.

Chechen separatists had stormed the school on the Wednesday morning and were holding more than 1,000 children and adults hostage. http://news.bbc.co.uk/2/shared/spl/hi/world/04/russian_s/html/1.stm


Or this entry from Wikipedia:


The Beslan school hostage crisis (also referred to as the Beslan school siege or Beslan massacre)[2][3][4] started the first of September 2004, lasted three days and involved the capture of over 1,100 people as hostages (including 777 children),[5] ending with the death of 334 people. The crisis began when a group of armed Islamic separatist militants. http://en.wikipedia.org/wiki/Beslan_school_hostage_crisis


After so many years, the questions remain: who ordered Beslan? It was a paid for job. The terrorists had satellite phones and computers and were uploading snuff and rape films. The Arabs were in communications with other Arab speakers. The Saudis and Qataris are the usual suspects, as they are the financiers of Jihad world wide, and the US/UK/NATO are their guardians. Ex-President of Georgia and now American professor Saakashvili has also come under suspicion, as he regularly assisted Islamic Jihadists operating to the north of him and Georgia was and still is a den of CIA and Islamic operatives.

In a world where spravidlivost ruled, those responsible, those who financed and those who provided military or political cover for the sponsors, would all be brought here and buried next to the graves of these children.

Many monuments have been built to the victims and survivors of Beslan, but the gymnasium remains and will always remain the main shrine to innocence lost. To the barbaric murder of hope, happiness and life, for even those that survived are scared and for those whose children died in that hot Hell on earth, a portion of their lives will always be soaked into the concrete of that building, like the blood that was spilt there.

The tree of Grief: 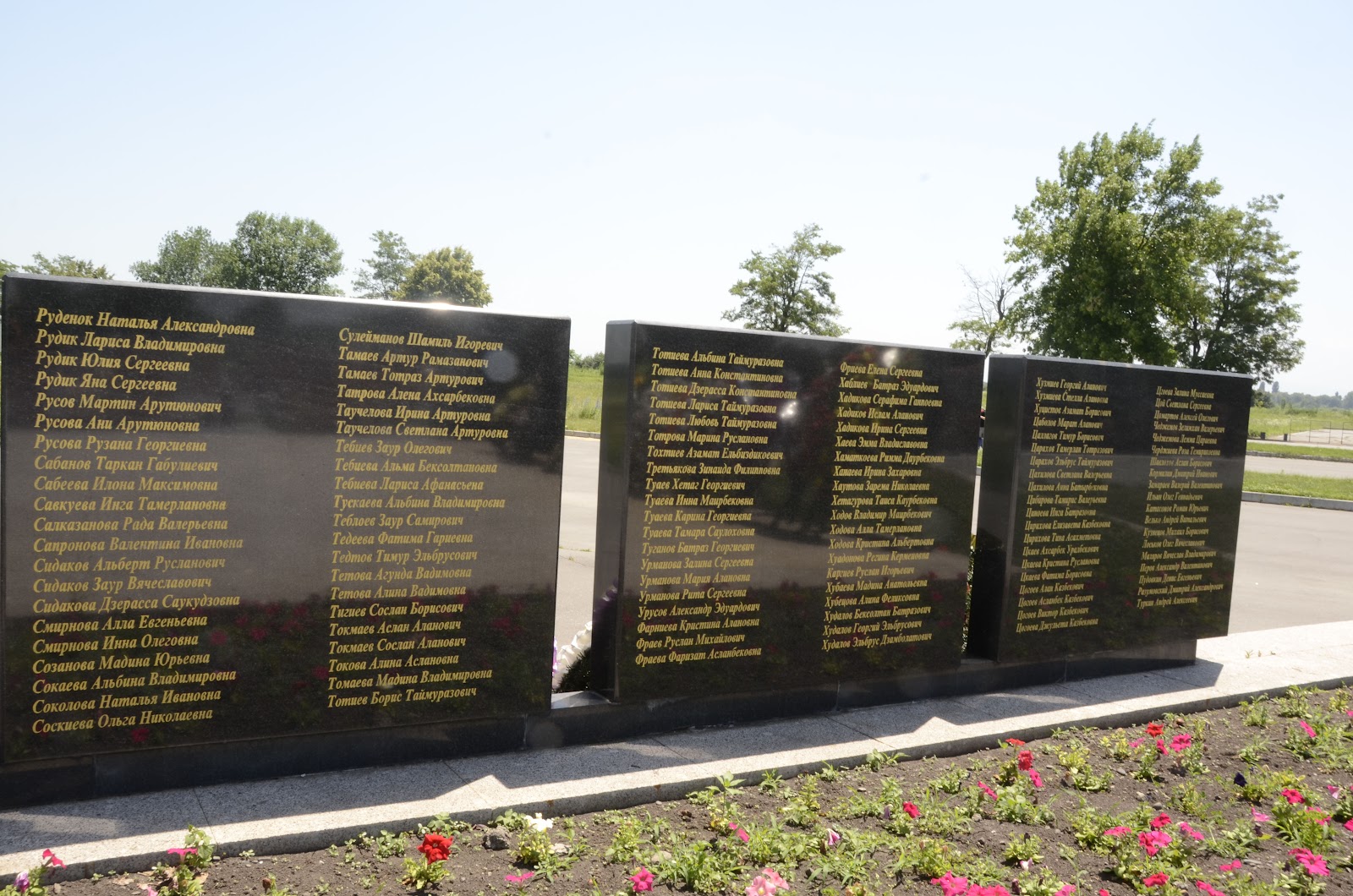 The new exterior of the crumbling gymnasium to protect this monument of loss. Russia doesn't play games with terrorists but then again their leader isn't a muslim trojan horse.

perhaps if Russia made a habit of waging peace instead of war they could avoid tragedies like this. if Russian had been treated like Russian treated chechins you would probably blow up their kids. now you are creating the next generation of motivated terrorist in Ukraine.
Job 4:8
As I have observed, those who plow evil and those who sow trouble reap it.

By your logic, you yanks deserve to be wiped off the face of the earth, just for the genocide you conducted against the Native Americans.

You have waged murderous non-stop war for 23 years, butchering everything in sight in the name of your pagan goddess "Democracy". You created those bloody Islamic Sunni terrorists. You created Al Quida, and now you created ISIS.

Just like you murderous thugs back the nazis in Ukraine who butcher the eastern Ukrainian population. But don't worry, your little experiment in Ukraine is about to collapse and with it a lot of your power.

Soon the Petrodollar will be history and so will your trolling job.

Now go bugger yourself, you worth lump of pond scum.

I watched Собачье сердце and believed it to be fiction, then I read this blog and was amazed to find out the operation worked!

Stanislav:
why is the West so convinced that its sanctions will force Russia to capitulate in Ukraine?
Their hubris is bizarre, and almost makes one think they will use the "Sampson option."
That is, bring down the global economy, or even worse, risk global or nuclear war, rather than lose.

It was Chechens that started the 2nd war and the leadership under the 1st president was hardly some great democrat president he is made out to be that it was Russia abandoning its military positions after the fall of the USSR and leaving stockpiles of weapons and weak support for the opposition of Dudayev that made the first war inevitable.

a very interesting article on Russian mortality. When will it get better? http://www.nybooks.com/blogs/nyrblog/2014/sep/02/dying-russians/?utm_source=feedburner&utm_medium=feed&utm_campaign=Feed%3A+nybooks+%28The+New+York+Review+of+Books%29

It has been improving for the past 8 years at a very high curve. Right now male life expectancy stands (as of 2013) at 65. Yes, that may seem low, but take it from the perspective that after 30 years of improving male life expectancy, the Soviet Union plateaued out at 65 and then every collapsed in 1991.

Having said that, there is no reason to believe that it will not continue increasing in 2014 (aka as we speak) and on ward. Anything above 65 is already uncharted territory.

Women's life expectancy has posted an even greater increase, already 1.5 years above anything the SU could accomplish.

Look up Russian Demographics on Wikipedia, there are some very good graphs. The turn around point came in 2006, where deaths started sharply declining and births increasing and the life expectancy increased too.

After all things Russia has to endure from the last 200 year, there is a constant data. The western countries are involved behind everything. So that must lead to the conclusion, who are "WE" dealing with, what do they want, is it wise to bring them here, must "WE" rely on corrupt fascist politicians who are talking right but do left or is it better to invest in contact with normal decent persons, such as Cristians, entrepreneurs, farmers, and to invest in the man in the street. Or are "WE" waiting for the next round of problems and insults for Russia and her People. And this will not stop.

"It should be noted that the Western media used every term possible, but never the term terrorist, when describing these animals. The BBC was particular in 1. Calling them Separatists and 2. Never mentioning that the majority of these animals were Arabs not Chechens."

I don't recall such reporting. All I remember is "crazies taking over elementary school", and believe most people here identified with the victims. Of course, our own monster at Sandy Hook later did same....

Monsters thrive when good people do nothing. Just think how many of these horrors proved later preventable...Like "pilots" unwilling to learn landings, or the mentally ill with open gun safes in their bedroom?

Hard to believe no one could have stopped Beslan.....Someone with kids of their own knew what was coming - yet they failed to act.

None of us needs protection from the state - we need protection from our own cowardice. The state just covers up the initial infection with a high fever. So it's always difficult to determine the true cause of death. Was it the nutbag, or the "protection".

Slashing terrorist tires is a good start. So is murdering pit bulls.

If they'll kill someone else's child - they can kill yours.

May they rest in peace.